Anyone who fosters animals knows that someday the time will come when they take that animal back to the shelter to be adopted out. The expression used if per chance the foster parent falls in love with that animal and chooses to adopt it themselves is foster failure. As I write this, my latest foster fail purring on my lap, I am changing the term to foster success, because giving Blaze a forever home is one of the best things I’ve done in a while.

The 10-year-old tuxedo male came to me as a temporary foster from the Oregon Humane Society in March of this year. He had arrived from another shelter back in January with a badly broken front leg. OHS set the leg and sent him out to foster with another person. Two months later, when they found the leg still hadn’t healed, they put pins in it and sent him home with me.

I’ve been fostering with OHS since 2006. Foster time for a cat with upper respiratory infection, the most common shelter illness, is usually around two weeks. A cat who is going through a surgery may come preceding surgery and then return to recuperate afterwards, taking nearer three to four weeks. I have twice fostered hospice cases who spent their final days with me. (As it turned out, they perked up once they were in a real home— one lasted another year, and one, several months.) When the time came to say goodbye, the loss was as if they were one of my own. Two weeks is easy; four is doable, but the longer they stay in my care, the harder it is to let them go. Blaze was with me for three months.

I have a dedicated room with a large kennel where I can house sick and injured cats until they are well and ready for adoption. This was especially important for Blaze who was on indefinite cage rest in hopes that this time the break would heal properly. It isn’t as dismal as it sounds, having all the kitty comforts— a big bed, litter box, scratcher, food and toys— plus a window that looks onto an overgrown back yard with the promise of bird TV. Even so, it can’t compare with the freedom of a normal cat’s life, so I spent a lot of time with Blaze, overseeing his actions. Luckily Blaze’s favorite thing on earth was to sit on my lap, so every morning, we would work on my book, and every afternoon we’d sit in the rocking chair and watch Dr. Who on my phone.

I kept taking him back for his check-ups, and the doctor kept saying another week, another two weeks. With each increment of time, wBlaze and I grew closer. The shy but affectionate cat came to trust me, and I began to think of him as one of the family. Eventually as his leg improved, he was taken off cage rest and put on limited exercise. That meant he could walk around a bit as long as he didn’t run, jump, or play. I fixed up a few beds around the room, and his exercise, when he wasn’t sitting on my lap, was moving from bed to bed. He limped a little at first, then it stopped. I couldn’t leave him unsupervised but got him out whenever I could.

Weeks rolled into months. Over time, Blaze met my cats Little and Tyler. Little, a foster failure from ten years ago, hadn’t been getting along with Tyler whom I adopted last year. The big male wanted to play with her, but she perceived it more as an affront, and it usually ended up in a hissing match. Suddenly there was Blaze. Both other cats were so astonished they forgot their peeves. Tyler tried his aggressive move on Blaze, but the mellow tuxedo cat just looked at him like, “I so don’t care.” Little gave a few hisses, but soon she and Blaze were cozied up at the screen door, looking out the wildlife. Could it be that this third cat was the ingredient that could defuse the tension between the other two?

Finally the day came when I was to take Blaze back to OHS to have his pins removed. From there, they would decide what came next, adoption or more time in foster. Even though I wanted him to be well and healthy, I found myself longing for him to come back home with me. I convinced the doctor it would be good for me to keep him a little longer, just to make sure everything went okay with his leg. She gave him another week. Suddenly I was faced with the fact I loved this cat, he fit with my community, and yes, I really wanted to adopt him myself.

I put the idea out on Facebook and got a 100% “do it!” response. Everywhere I looked I found positive signs; after all, the month of June is Adopt-a-Shelter-Cat month. Everything pointed to my keeping Blaze, but there was that one lingering guilt: You’re not supposed to keep your fosters— Foster Failure!

I was talking to some cat friends a few days before the return day, and needless to say, the subject turned to my desire to adopt Blaze, but when I mentioned foster failure, a friend immediately got on my case.

“I don’t like the term, foster failure,” she said. “There’s nothing failure about it. You know this cat better than anyone and have determined that you can give him a great home. I’d call that a foster success!” 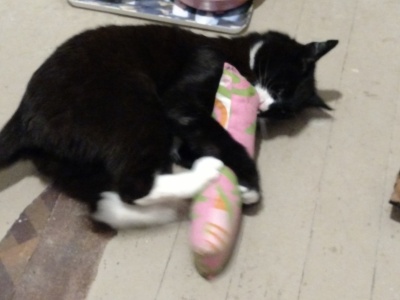 A foster success? I’d never thought about it like that. But why not? It’s not like I adopt all the cats I foster, and at ten years old, a shy cat with a few health issues isn’t the most adoptable cat in the shelter. Though OHS tries its best to find every animal a good home, sometimes it takes a while, and it doesn’t always work out even then. Why put this boy through that if we didn’t have to?

So I took the plunge and brought Blaze home. Now he can have the run of the house. I’m happy. He’s happy. My Facebook friends are happy. (He’s already been asked for an interview with Sneaky the Library Cat’s blog.)

And I’ll never again use the term, foster failure. It will be only foster successes from now on. 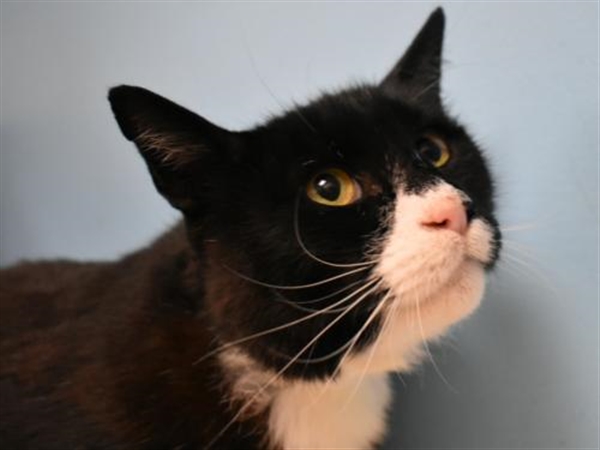 I am the crazy cat lady, animal shelter volunteer, Trekkie, and mystery writer. I live in the rainy Pacific Northwest and will watch any TV show or movie filmed here. Even though I am of a goodly age (sixty-something) I go to Star Trek conventions in costume and am not afraid to be by myself. I enjoy my life in the cat lane. Words to live by: Spay and neuter; Live long and prosper; Grant me the serenity to accept the things I cannot change, courage to change the things I can and the wisdom to know the difference.
View all posts by Mollie Hunt →
This entry was posted in Animal Shelters, Cats, Crazy Cat Lady Mysteries & More, Thankful Thursday and tagged #blazerescuecat, adopting a cat, cats, foster failure, foster success, shelter cat. Bookmark the permalink.

I Read What You Write!
The Myth of Prometheus

Contemporary Writings by Nathan AM Smith

Here's How It Happened
LetsJapan

2 Cats and a Blog

The Advenutres of Lilly Bug and Joel the Brave