With Lux gone, the house felt emptier than ever. In March, we had lost our old cat, Dirty Harry, to kidney disease. Harry was the best, the smartest, the sassiest, the sweetest cat on this earth. Though our other 3 are all remarkable in their own ways, some cats are singular. Harry was one of those cats, and so is Lux.

I was still drowning in my ongoing panic attack, though it was improving slightly. I had learned ways to combat it, such as physical activity. I gardened and walked. I didn’t know I could push this old body so hard without triggering a heart attack.

I need to note that though most of the anxiety symptoms were unbearably oppressive, one odd side effect was the persistence of beauty. I perceived beauty in everything, places I would have ordinarily ignored. Nothing is without merit, even the abyss of mental illness.

Meanwhile, Jackson was making arrangements for the next step in Lux’s journey. A place was being created for him to live, his own apartment above a veterinary office. It was a beautiful and airy space in a small town. He could stay as long as it took, getting used to a home away from home. There were many windows and an elaborate climbing tree, complete with silk leaves. The tree was very pretty, a labor of love, but I told the doctor he would eat those leaves. Lux has Pica disorder*, with a preference for plastic. Sure enough, the first note I got back from her was how Lux had eaten the leaves and thrown up green silk all day. 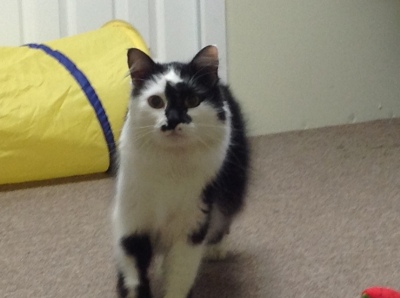 But I get ahead of myself. Before Lux left Portland, Jackson bought him a Thundershirt, which is a soft fleece vest known to have a calming effect on both cats and dogs. It’s designed to use gentle hugging to calm an animal, and it was worth a try. Lux didn’t seem to mind it being put on over his ling fur. He looked very debonair in it. I wish I had a picture, but I was too busy playing with Lux for the last time before he left town.

*“Pica is the term used for the behavior of eating non-food material. The most common material associated with Pica is usually wool such as blankets, socks, jackets, etc., but some cats will nibble on just about anything from plastic grocery bags to litter.” catbehaviorassociates

"I have enough time to rest, but I don't have a minute to waste". Come and catch me with your wise words and we will have some fun with our words of wisdom.

Wellcome to get to know Finland and Finnishness, as well as the world of 80's and 90's childhood memories, dreams, dance, gymnastics, baking and other interesting topics. Jump along the dance girl's journey!

Magic is real. Magic is Art!💜

finding serendiipitii
To Ink - a blog from Melting Neurons

A Teen's Definition of Life

The world from a feline point of view

Stories that keep you up all night

I Read What You Write!